Intel made a smattering of announcements during its press event at CES today, with topics spanning from cellphones and ultrabooks to natural human interfaces and shared all-in-one computing. We have a summary of the different subjects below, though you may want to read this press release for more information. 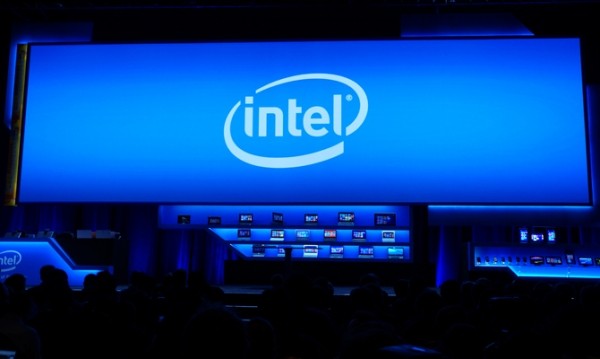 Following up on its initial push into the smartphone market with Medfield last year, Intel has revealed a new Atom-based solution that will target the budget-oriented market, particularly in developing regions. Codenamed "Lexington," the new platform will include the Atom Z24020, which runs at 1.2GHz and supports Hyper-Threading as well as 1080p hardware encoding and decoding, two cameras including one that can handle 7fps bursts in 5MP quality, dual SIM, dual standby and microSD cards. To start, Acer, Lava and Safaricom will use this platform.

For the upper-end segment that is currently occupied by Medfield, Intel is preparing its "Clover Trail+" chip (marketed as the Atom Z2580), which carries a dual-core processor, a dual-core graphics engine and Hyper-Threading support. Intel says this part will deliver up to twice the performance of its current-generation mobile solution (the Atom Z2460), yet it will remaining competitive on power consumption and battery life.

With the Atom powering Windows 8 slates from Acer, Asus, Dell, HP, Lenovo, LG, Samsung and others, Intel is under pressure to deliver solid platform refreshes, and that's precisely what it plans to do. The company has unveiled a new 22nm Atom SoC (codenamed "Bay Trail") that touts four processing cores -- a first for the series. It's said to be the most powerful Atom chip to date, offering more than double the performance of Intel's existing tablet processor, along with improved security, all-day battery life and lower prices. 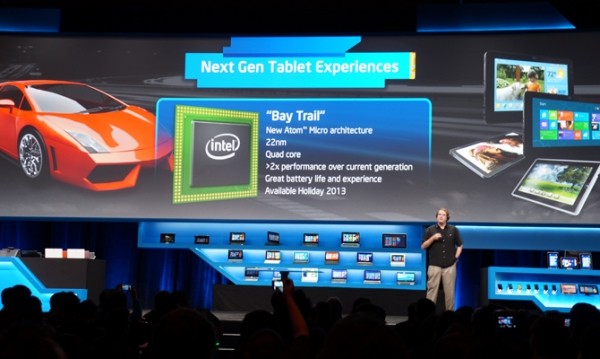 Although Intel plans to launch 10W fourth-generation Core processors (codenamed "Haswell") later this year, the company has taken the liberty to build an ultra-low power Ivy Bridge chip that should be available in devices such as the Lenovo IdeaPad Yoga 11S sometime this spring. This new part more than halves the TDP of older Ivy Bridge mobile chips, though it isn't clear how this was accomplished or how much it will dent performance. 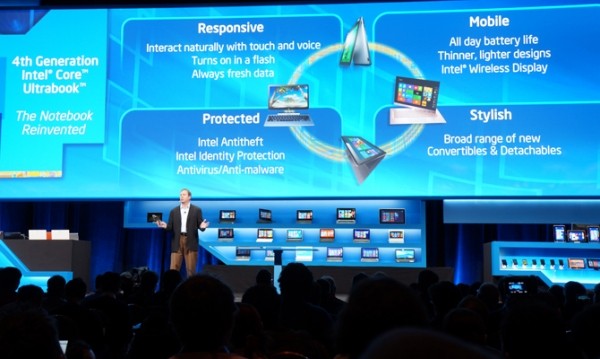 Intel also plans to tighten the product requirements for next-generation ultrabooks. In order to qualify for the branding, manufacturers will have to include support for touch input and WiDi, Intel's wireless display standard. Haswell-based ultrabooks will also bring a leap in battery life, with systems expected to withstand up to nine hours of continuous usage.

As with many other vendors at CES, Intel showed off an "adaptive" AIO with touch support that can lay flat on a table and has a battery so it can be easily moved around a home or office. The company defines "adaptive AIOs" as systems with large touchscreens that can be used for multiplayer games and many other shared experiences. "Simply put," Intel says, "these devices will help bring 'game night' back to its roots through shared experiences where families and friends gather around the system to interact, play and have fun." 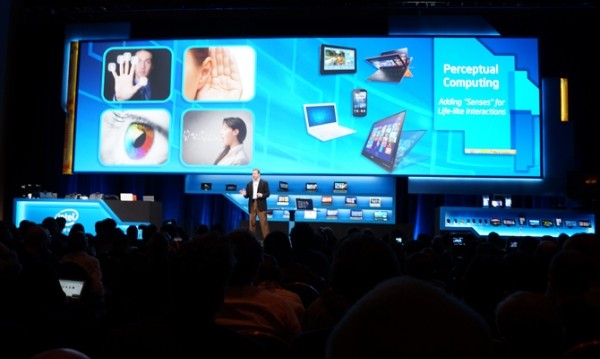 In that same vein, the chipmaker revealed that it's working with video service providers including Comcast and Bouygues Telecom to deliver live and on-demand TV content to Intel users. By using its Puma 6MG-based XG5 multi-screen video gateway, the company plans to let customers stream Xfinity TV in the US and Bbox TV in France across Intel-based tablets, ultrabooks and AIOs. No word on when this will go live.