Nintendo Announces the New 2DS Handheld Console, Drops Price on the Wii U 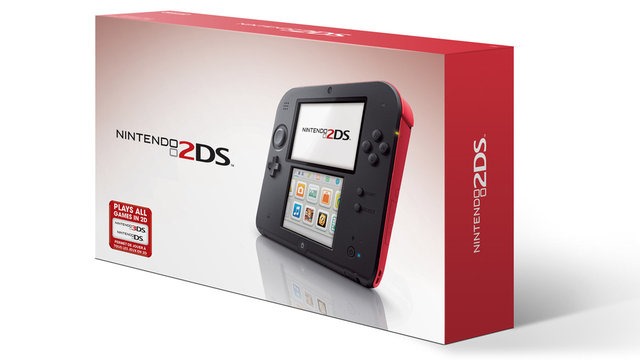 Nintendo’s somewhat lost 3DS console has just got a younger brother. The new handheld called the ‘Nintendo 2DS’ is termed an entry-level portable gaming console by the Japanese corporation and comes at an attractive price tag.

What’s more is that it can play all the games of your 3DS and DS library.

The 2DS features an all new tablet-like design, and has lost its hinge. It has lost its 3D effects too but still features the same 2 rear-cameras for capturing 3D photos and stuff but they can no longer be viewed directly on the console, of course.

Carrying the DS tradition, the console will come with 2 screens with the lower display being a resistive touchscreen. A few design changes are there too, including those to the shoulder buttons.

The console will come bundled with its own stylus and 4 GB memory card. It will be priced alluringly at $129. That’s low even by Nintendo standards and is a whole $50 cheaper than the 3DS. The 2DS will be available in the mid of October.

The design of the console remains one of the more controversial aspects of this gadget. The loss of 3D isn’t a huge thing though as a lot of people don’t touch it anyway. It depends on user whether they’re willing to taste the more advanced feature of its 3DS brethren, or are price-conscious.

Sensing pressure from the launch of the PS4 and Xbox One, Nintendo has also cut down the price of the Wii U Deluxe version by $50. That makes it $100 and $200 cheaper than its biggest competitors.

Still, what will remain an issue will be its rather weak gaming library, especially when one looks at the rivals. If the console manages to catch fire after this price cut, it might see that get better after all.

The price cut will be applied around the mid of September. The spies you'll wear: When big data gets too personal Free Online Tools To Check Your Website For Malware Scripts